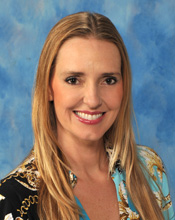 Dr. Blaya earned her medical degree from Pontificia Universidade Cathólica do Rio Grande do Sul School of Medicine in Porto Alegre, Brazil, in 1997, and completed her residency in neurology there in 2001. She completed her internship in internal medicine at University of Miami/Jackson Memorial Hospital in 2005. Dr. Blaya started a post-graduate, four-year residency in neurology at University of Miami/Jackson Memorial Hospital and completed at Tulane Hospital and Clinics/Tulane University in 2009. She was then appointed assistant professor of clinical neurology at the Tulane University School of Medicine, where she also served as the neurology clerkship director of the medical student education from 2010 to 2015. At Tulane, Dr. Blaya also worked as a consultant for The Trust, an organization that provides resources, programs and services to former NFL players.

In 2015, Dr. Blaya joined Memorial Healthcare System, at the Memorial Neuroscience Institute and Memorial Physician Group in the Division of Neurology.

Dr. Blaya’s research interests include headaches, concussions, neurological diseases among women and adolescents, and lumbar puncture procedure. She has worked as a general neurologist with a special interest in headache and concussion since 2001.