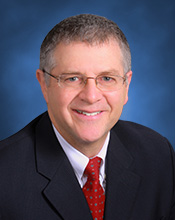 After earning his medical degree from the Stritch School of Medicine at Loyola, University of Chicago, Dr. O'Donnell completed his residency at Letterman Army Medical Center in San Francisco. He completed two surgical fellowships, first at Walter Reed, and later at Cleveland Clinic. Board certified in surgery and vascular surgery, his special research interests include endovascular management of aortic dissections and arterial trauma and other aortic diseases.