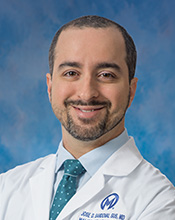 Jose Sandoval Sus, MD, a native of Colombia, received his medical degree from Universidad Autonoma de Bucaramanga (UNAB). He then worked as a hospitalist in the Hematology Oncology Department of a tertiary care hospital affiliated with UNAB (Clinica Carlos Ardila Lulle/FOSCAL). Following this, Dr. Sandoval Sus joined Moores Cancer Center at the University of California, San Diego as a postdoctoral research fellow in the research group of Dr. Thomas J. Kipps and Dr. Januario Castro, where he focused on phase I/II translational clinical trials in chronic lymphocytic leukemia (CLL).

After working as a clinical instructor at UNAB in Colombia for six months, he completed an internal medicine internship and residency at the University of Miami/Jackson Memorial Medical Center. Dr. Sandoval Sus then was internal medicine chief resident at the Miami VA Healthcare System, before moving to Tampa and completing a hematology and medical oncology fellowship at the University of South Florida/Moffitt Cancer Center.

During this time, Dr. Sandoval’s research focus was in prognostic and therapeutic aspects of lymphoid malignancies, with an emphasis in CLL and mantle cell lymphoma (MCL). His professional interests are in patient-focused care of all hematological malignancies, with a special emphasis in both indolent and aggressive lymphoid tumors. He is also very interested in the design and conducting of early phase clinical trials, medical education and health disparities in malignant hematology.