An infant’s sudden, unexpected death can be a devastating event for parents and families. And it happens to about 3,400 babies every year, according to the Centers for Disease Control.

Medical professionals define each of these tragic events with the term “sudden unexpected infant death,” or SUID. One of the causes for SUID is another medical term you may have heard before — SIDS, which stands for sudden infant death syndrome and usually happens when a baby is sleeping.

The ABCs of Safe Sleep

Terri Brevda, a community perinatal education coordinator at Memorial Regional Hospital Family Birthplace, is an expert on keeping babies safe. She says there are certain SIDS and SUID risk factors that parents cannot control, such as any metabolic disorders or genetic conditions a baby may have. Those things will take a medical professional’s care to address.

However, Brevda says, any caregiver can benefit from learning how to minimize risk factors in a child’s sleep environment.

These ABC tips are an easy way for parents and caregivers to remember how to make a baby’s night safe and restful. 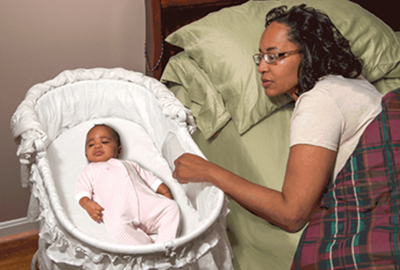 “Babies should only sleep alone in an empty crib with a proper fitting, firm mattress and tight sheet. No blankets, stuffed animals, socks, hats or bumper pads,” Brevda says.

The reason for this is that infants need to be able to breathe, she says, and “bedding and other items in the crib can cause them to get trapped, rebreathe [to inhale previously exhaled air] or cut off their air.” 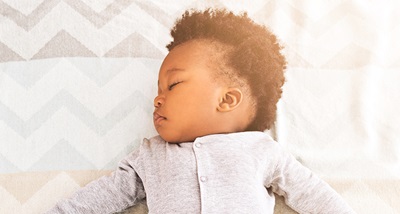 Babies should sleep only on their backs, whether it’s nighttime sleep or just a nap. While some people believe that a baby should sleep on the stomach so they don’t choke, Brevda says it’s actually the opposite.

When babies sleep on their backs, the esophagus (which connects the throat and stomach) lays below the trachea, or “windpipe,” which helps us breathe. If babies vomit or spit up while on their backs, Brevda says, the vomit or spit-up would have to move upward against gravity to cause choking.

If babies sleep on their stomachs or sides, Brevda says, “the esophagus is sitting on top of the trachea, so the spit-up can go right down into the lungs.” 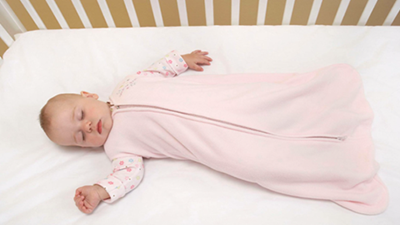 A crib, bassinet or portable crib (pack and play) is the only safe place for babies to sleep. Brevda says that even sleep-deprived parents must resist the urge to pull a baby into bed with them for feedings and soothing. It’s far too dangerous.

“When a parent brings a baby into the bed, or maybe a couch or recliner, the pillows, the blankets, the linens can cover their face, suffocate and choke them,” Brevda says. “Also, parents are tired, and they can fall asleep very, very quickly. It's a deep sleep, and they may roll on top of their baby and smother them. Or the baby could roll off and fall.”

Other SIDS Risk Factors and How to Avoid Them

While these tips are a good start, they don’t cover everything that parents and caregivers can do to keep babies safe while sleeping. Additional precautions include:

No smoking around babies.

Simply put, smoking is bad for babies in every form. Mothers who smoke during or after pregnancy put their babies at greater risk to die from SIDS, according to the National Institute of Health (NIH). Smoking while pregnant triples the baby’s risk of SIDS death, and even exposing an infant to secondhand smoke doubles the SIDS risk, the NIH says. Research has shown that babies who have died from SIDS had a higher concentration of nicotine in their lung tissue.

Research has shown that soft sleeping surfaces and loose bedding are major SIDS risk factors, according to the NIH. One study found that babies sleeping on their stomachs on soft bedding were 21 times more likely to fall victim to SIDS than those who slept on firm beds and on their backs. In addition to providing firm beds, it’s best to remove any loose, extra bedding from infants’ sleep environments — including pillows, quilts and even toys.

Experts recommend that parents use a wearable blanket to keep infants warm without the need for loose bedding and that babies’ heads and faces remain uncovered through the night.

Babies shouldn’t be too warm for sleep.

Overheating is another big SIDS risk factor, which is another reason for removing excess clothes and bedding from the sleep space. NIH reports that studies show an overheated baby is more likely to go into a deep sleep from which it is difficult to arouse. So avoid overdressing infants. And if the room’s temperature is comfortable for you, it’s OK for the baby, too.

Memorial is Gold-Certified for Safe Sleep 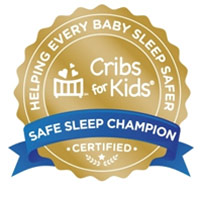 “During safe sleep audits, I go around to the families’ rooms, and if I spot a violation of safe sleep, we talk about it,” Brevda says. “To achieve that, all the staff has to be educated in safe sleep, and they are.”

Memorial’s Gold-certified hospitals also help families or caregivers who don’t have safe sleep spaces for their babies by arranging for them to get one. Brevda says these patients often receive a pack-and-play crib, so their baby has a safe environment for sleep once they’re at home.

The hospitals also hold community outreach events to educate parents and caregivers on safe sleep. Brevda says the pandemic shifted these events from in person to online, but they are still available via free webinar.

Sign up for our free Infant Safe Sleep online class.