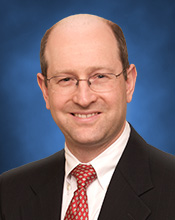 Dr. David Bimston graduated with honors from Washington University in St. Louis before attending medical school at New York University. He culminated a seven-year general surgery residency at Northwestern University with a two-year research fellowship in molecular endocrine messaging. He then moved to Los Angeles for two years of subspecialty training in surgical endocrine oncology at City of Hope National Medical Center.

In 2001, Dr. Bimston relocated to South Florida, serving as Director of Surgical Oncology at North Broward Medical Center and then, Chairman of the Department of Surgery at Imperial Point Medical Center in Ft. Lauderdale. Dr. Bimston began an endocrine surgical collaboration with R. Mack Harrell, MD, in 2005, before both specialists moved their practice to Memorial Healthcare System in 2011.

Dr. Bimston is board-certified in general surgery by the American Board of Surgery. He has served as an assistant professor of surgery at Nova Southeastern University since 2003. As a pioneer in minimally invasive approaches to endocrine surgery, he has accumulated extensive experience in parathyroid, thyroid and adrenal surgery. Dr. Bimston's unique expertise and meticulous, patient-centered approach to endocrine surgery have made him one of the most respected surgical specialists in South Florida.