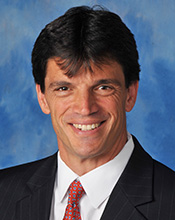 Dr. Daniel Sheldon is board-certified in orthopedic surgery and has been practicing general orthopedics in South Florida since 1999. He has subspecialty interests in joint reconstruction (hip and knee replacement) and arthroscopic surgery (hip, knee and shoulder). He has been at the forefront of technological advances in these areas, being the first to perform hip arthroscopy and direct anterior hip replacement surgery at Memorial Healthcare System. After graduating from Dartmouth College in 1990, he earned his medical degree from the University of Miami Miller School of Medicine. He completed his internship and residencies at the University of Miami/Jackson Memorial Hospital, where he was Chief Resident in Orthopedic Surgery from 1998-1999. He served as Chief of Orthopedics at Memorial Hospital West from 2007-2009. Dr. Sheldon has served in several key leadership positions at Memorial Hospital West including chief of orthopedic surgery and vice chief of the Department of Surgery. His professional memberships include the American Academy of Orthopedic Surgeons, American Medical Association, American Orthopedic Foot and Ankle Society, American Orthopedic Society for Sports Medicine, Arthroscopy Association of North America, Florida Medical Association, Florida Orthopedic Society and Southern Orthopedic Association.