A person who is bleeding can die from blood loss within five minutes.

Sometimes, that's not enough time for emergency workers to respond.

To help the problem, Memorial Healthcare System and the City of Hollywood are joining together to support a national effort that educates and prepares residents to respond to traumatic injuries caused by accidents or acts of public violence while help arrives.

The city and the healthcare system are installing life-saving bleeding control kits and training residents and staff who have not had prior medical training or background.

The goal is to have bystanders ready to take action with kits designed to be as common as fire extinguishers in public and commercial buildings.

Smart Snippet: Video
Datasource: Stop The Bleed
“This is part of a movement recognizing that bystanders are usually first on the scene and their actions might help save a life,” said Candace Pineda, Trauma Program Manager at Memorial Regional Hospital. “The goal of Memorial Trauma Center is to see this training become as universal as CPR.”

The bleeding control kits include tourniquets and other first-aid materials and will be installed in city facilities and community centers including City Hall and downtown’s ArtsPark at Young Circle.

The kits will be installed in highly-visible locations near existing emergency equipment such as fire extinguishers and defibrillators.

“While help is on the way, bystanders can take the very important first steps in saving someone’s life. By offering training and having these toolkits easily accessible and ready to go, the better the chance a victim will have for a positive outcome in an emergency situation,” said Hollywood Fire Chief Chris Pratt.

The Stop The Bleed campaign was initiated in October 2015 by the Department of Homeland Security, following a study of mass casualty events that revealed response and outcomes could be improved with aid from bystanders.

According to a recent National Academies of Science study, trauma is the leading cause of death for Americans under age 46. A person who is bleeding can die from blood loss within five minutes; therefore it is important to quickly stop the blood loss. Those nearest to someone with life-threatening injuries are best positioned to provide initial care.

Memorial is currently conducting training sessions for Hollywood city employees. Any organization interested in scheduling a training session can send an email to traumaeducation@mhs.net to request more information.

Memorial plans to offer similar partnerships with other South Broward cities in an effort to share the knowledge with all residents and visitors in Broward County. 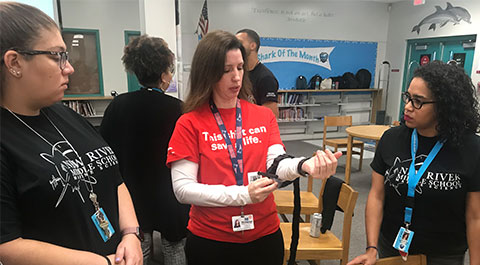 Memorial To Train Broward Teachers On Stop The Bleed

Memorial Regional Hospital's Trauma Team are teaming up with Broward schools and local EMS agencies to train more than 2,000 teachers and school staff on how to use Stop The Bleed kits. 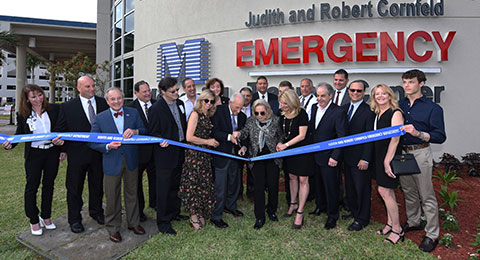