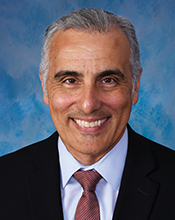 Dr. Jacob Tangir is a board-certified gynecological oncologist. He earned his medical degree at the Universidad Central de Venezuela in Caracas. He completed a research fellowship in gynecologic oncology at Harvard Medical School in Boston, as well as a residency in obstetrics and gynecology and a fellowship in gynecologic oncology at Yale University School of Medicine in New Haven, Connecticut. Dr. Tangir also trained in minimally invasive surgery for gynecologic cancer at l’Université Laval, L’Hotel-Dieu in Quebec.

Dr. Tangir is a clinical assistant professor of obstetrics and gynecology at Nova Southeastern University, where he teaches residents and medical students. As a specialist in gynecologic cancer, he has written several articles and book chapters and has presented at national and international meetings.

Dr. Tangir is one of the first surgeons in South Florida to use robotic gynecologic surgery to treat benign and malignant gynecologic cancers.