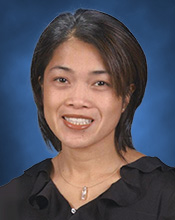 Dr. Jesusa Fortu is a board-certified doctor of pediatric emergency medicine. She earned her medical degree from the University of Santo Tomas School of Medicine in the Philippines in 2000. She completed her pediatric internship and residency at Miami Children’s Hospital in 2004, and completed her residency in pediatric emergency medicine at the University of Louisville Kosair Children’s Hospital in 2007.