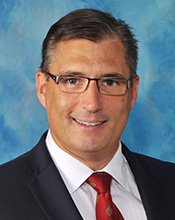 Dr. Carl Eierle is board-certified in orthopedic surgery and specializes in primary, complex and revision joint replacement of the hip, knee and shoulder. He is a fellow of both the American Academy of Orthopedic Surgeons and the American Association of Hip and Knee Surgeons. In 2006, he completed the prestigious Aufranc Fellowship in Joint Replacement at the New England Baptist Hospital in Boston. For six years, Dr. Eierle served as the director of the Joint Replacement Service at the Walter Reed National Military Medical Center, expanding the service to become the busiest arthroplasty service in the Department of Defense. Committed to both traditional and novel techniques, Dr. Eierle employs sophisticated methods including direct anterior approach hip replacement and minimally invasive surgery for faster recovery and improved patient outcomes.

A 26-year Navy veteran, Dr. Eierle earned his medical degree from the Uniformed Services University of the Health Sciences (USUHS) in Bethesda, Maryland. He completed a general surgery internship and orthopedic surgery residency at the Naval Medical Center in San Diego. Throughout his career, he has held academic posts at USUHS and Tufts University. In 2008, he was selected as Orthopedic Educator of the Year, and in 2010, he was named as one of the top five orthopedic surgeons in the US Navy by the Surgeon General of the United States. He also has a subspecialty interest in non-arthroplasty hip preservation surgery, including hip arthroscopy and femoral osteotomy and osteoplasty.