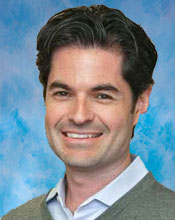 Dr. Jonathan Bratter is a board-certified obstetrician and gynecologist. A native of South Florida, he graduated from The University of Florida, where he majored in neuroscience. In 2003, he graduated from medical school at Nova Southeastern University. He completed his OB/GYN residency at the University of Miami/Jackson Memorial Hospital. Dr. Bratter opened his practice, Women’s Health of South Broward in Miramar, in 2009.